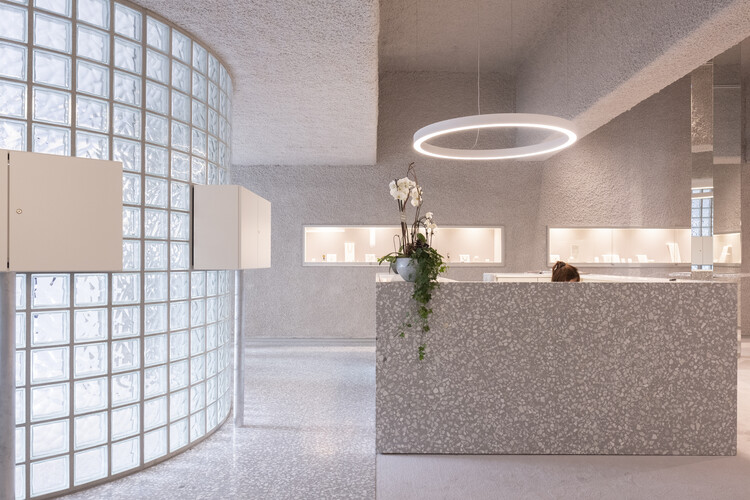 Text description provided by the architects. Located in the city center of Charleroi, the new Polomé’s jewelry store is located in a former supermarket. Starting from an undefined space whose depth was underlined by a uniform suspended ceiling covering the entire surface, the aim of the architectural intervention is to erase this connotation by highlighting the existing singularities, hidden under several layers of finish.

The design of the project was initiated as a circuit following the progression of the client in space. In fact, this journey begins outside the building. The showcase takes the form of a space for contemplation marked by a round recess in glass bricks. By its diaphanous characteristics, the brick preserves the intimacy of the jewel while illuminating the street.

The entrance to the store is punctuated by a series of thick beams, testimony to the structural logic of the building which sequences the space. The organization of the surface becomes scenography when the route borders the long curtain materializing the separation between the stage space – the showroom – and the backstage – the workshop and office spaces.

This route is also sporadically punctuated by alcoves, whose intimacy is accentuated by the textile drape surrounding the fitting area. The scenography can also be seen in the lighting of the store, where the fixtures sometimes underline the horizontality of the display desks, sometimes the verticality of the alcoves.

Finally, the customer’s journey is naturally guided towards the back of the jewel thanks to a brighter source of natural light emanating from a second glass brick recess echoing the window on the street. The brick restructures the light and illuminates the choir. The other side of the store is punctuated by high mirrors which reduce its linearity by playing with reflections. These vertical elements also delimit more individual assembly spaces.

The chosen materiality creates a chromatic unity through the space while playing with different textures with the aim of highlighting the different colors of the gemstones. The choice to work with textiles on the walls and on the floor, as well as the cellulose projected on the ceiling, contribute to the creation of intimate acoustics.